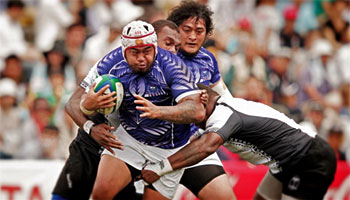 Samoa continued their unbeaten run in this year’s Pacific Nations Cup with a narrow 29-26 victory over Fiji in Tokyo on Sunday. We haven’t featured much from the tournament so far, so here’s three of the best tries from the match.

Led ably by experienced winger David Lemi, Samoa now need to beat Japan next to claim the 2012 title. On Tuesday they beat rivals Tonga 20-18. Japan, who were on a high following their Asian 5 Nations win, lost 24-20 to Tonga, but will aim to boost morale with a win.

While both Samoa and Fiji took a while to get going in this match, once they did it was highly entertaining as both showed their power and of course, famed running game.

Nemia Kenatale started things for the Fijians after a great counter-attack and some great interpassing. Samoa then scored two tries in the space of a few minutes as David Lemi first set up Sevens powerhouse Alafoti Faosiliva, then got on the end of a brilliant piece of play himself.

Fiji play Scotland this coming weekend, and have made wholesale changes to their side following the Samoa defeat. Eight positional replacements will greet the Scots, who will no doubt be relishing playing in a bit of sunshine, despite their historic win over Australia in the rain.

The three best tries of the game featured below. If you’d like to watch the whole match again, and other PNC 2012 games, you can do so on the IRB Website here.