Three incredible talents nominated for Breakthrough Player of the Year 2017 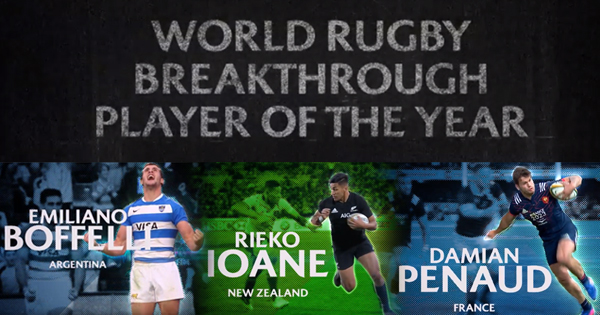 World Rugby have announced their three nominees for the World Rugby Breakthrough Player of the Year 2017 award. The list includes a young All Black superstar, plus two others who if they are not already, will soon be household names.

In order to be eligible for this award, players must have played less than one year of senior international rugby, with former internationals Felipe Contepomi and Melodie Robinson among the panellists selecting the shortlist.

This product of the Argentina youth system, Boffelli represented his country at U18, U19 and U20 level before a knee injury threatened to sideline him indefinitely. But he came back stronger and quicker than ever and made his full international debut for the Pumas this year.

Capable of playing all positions in the backline, the gifted footballer has settled down very well on the wing for the Argentinian national side. Good on the air, solid on defence and capable of nailing long distances goal kicks, the 22-year-old is a great asset for the Pumas and has a bright future ahead of him.

The winger marked his New Zealand debut last November with a try against Italy, but it is in 2017 that he has truly made his mark on the test arena with eight tries in as many starts.

The 20-year-old scored twice in his first start against the British and Irish Lions at Eden Park and claimed another double in his first Bledisloe Cup match in August.

With pace and strength to burn, Ioane finished the Rugby Championship as joint-top try-scorer with five after beating the most defenders, making the most clean breaks and metres in the competition.

The son of former France international Alain, the 21-year-old has long been talked of as a player to watch and his impressive performances for Clermont and France U20s since 2015 earned him his test debut against South Africa in June.

The centre immediately repaid Guy Noves’ faith in him with a try in that 37-15 defeat in Durban, as he showcased his pace, impressive step, vision to spot a gap and confidence to back himself at the very highest level.

World Rugby Chairman Bill Beaumont said:  “The breakthrough player category is always interesting because it gives us a sneak preview of what young talent is out there and who the game’s future big names are likely to be.

“It’s a great achievement even to receive a nomination for a short-list so each of these three exciting young players should feel proud for getting to this stage of the process.”