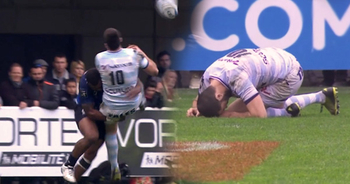 Montpellier produced the shock result of the weekend in the Top 14 with a 60-7 thrashing of Racing 92, taking them up to fourth in the league standings. This try scored by Jesse Mogg was one of the more spectacular of the day, coming from a fantastic tackle by Timoci Nagusa.

Fijian flyer Nagusa scored two tries on the day, but his contribution towards former Brumbies fullback Mogg’s try stood out for obvious reasons. He flew in to perfectly time a tackle on Racing number ten Remi Tales, who had no chance of avoiding the hit.

The ball popped free and some neat work resulted in a nicely taken try for speedster Mogg, who was first capped by the Wallabies in 2013.

Racing were missing Dan Carter, Mike Phillips and Juan Imhof as well as some French players on duty in the Six Nations, but the loss allowed Montepellier to get closer to that play-off place.

It also showed that with the likes of Francois Steyn, Bismarck Du Plessis and Nagusa in their ranks, Montpellier can be a seriously potent force to deal with.

“We were simply swept aside. We committed too many errors and lost the ball too often to hope to compete with a side that was physically stronger,” said Racing centre Alexandre Dumoulin.