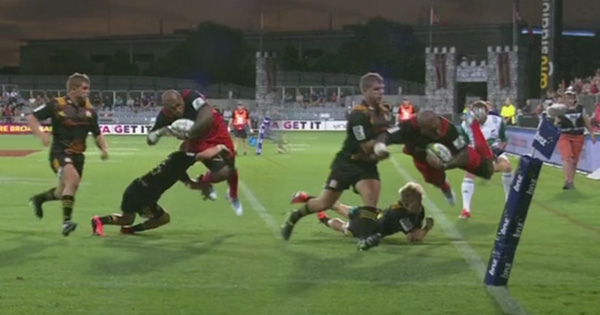 The Chiefs got their 2016 Super Rugby campaign off to a great start in Christchurch, beating the Crusaders 27-21 on Saturday night. Chiefs coach Dave Rennie was full of praise for young fullback Damian McKenzie, who made this hugely impressive tackle in the second half.

McKenzie, who you may remember as being a star with the New Zealand U20 side, scored a try and kicked two conversions and a long range penalty, and played a key role in the Chiefs backline.

His tackle on gigantic Fijian winger Nemani Nadolo defied belief, as he lined him up, got low and not only saved a near certain try, but bumped the giant winger into touch with perfect timing.

While coach Rennie didn’t touch on the tackle, he raved about McKenzie’s overall performance.

“Obviously we are pretty fortunate with Damian at the back,” he said. “He is pretty keen to jump in behind the forwards to play off them, or jump into first receiver.

“I thought he was massive; he was an absolute handful and is just so electric. We were rapt with him. When guys are tiring, too, he is so quick and he is positive. So he found quite a bit of space, when the ball is kicking back. He played a big part in the last couple of tries, so it was great.”

When you consider that McKenzie is listed as weighing around 80kg’s, and Nadolo around 130kg’s, this tackle was mightily impressive, and pretty courageous too.

Perhaps now we know why he has reason to smile when kicking at goal.