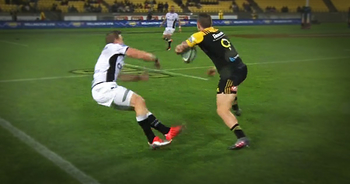 The Hurricanes blew the Sharks away in Wellington, scoring six tries to win 41-0 and set up a home Super Rugby semi final. Beauden Barrett and TJ Perenara were outstanding, so here is a quick look at a stand out moment from Perenara, as he dominated his opposite number.

The domination was not just in overall gameplay, as former Toulon scrumhalf Michael Claasens was on the receiving end of a powerful home side performance, giving him little chance to shine on a day that the weather disrupted the visitors’ game, and they offered little by way of variety.

With a good forward platform, Hurricanes halfback Perenara made key decisions, scoring a try himself and setting up this one for Jason Woodward, after a poor clearance kick by the Sharks.

In was the kind of attacking mindset, sparked by James Marshall, that often sets the New Zealand Super Rugby teams apart from the others in the competition.

“When guys are in form, they see the game so clearly and a lot of his option taking is because of that, because he’s confident,” said Hurricanes legend Christain Cullen of Perenara post match.

“You see the game in front of you, it opens up, and they take it [the opportunity]. That’s what he did tonight, making good decisions.”

After the game Perenara was interviewed and after praising all of his teammates, and his forwards, the focus shifted to his performance and him possibly being Man of the Match. Humble as ever, he refused to acknowledge his own game, deflecting the focus.

“Again, that comes down to the boys who put us in good positions. Without our forwards and the hard work up front we have no time and no space out there, so without them doing the hard work and being physical for us, we’ve got nothing to do. So again, credit to them.”

With Aaron Smith such a dominant force for the All Blacks, it’s easy to forget that Perenara is hot on his heels, offering a different style of play but one that can be equally effective.

Those two may just meet in the final of the tournament, if the ‘Canes can see off the Chiefs, and the Highlanders beat the Lions in Johannesburg. Both semi finals take place on Saturday.