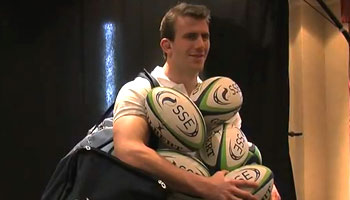 Returning England flanker Tom Croft admits his recall to the national squad after an eight-month injury layoff came as a shock – but his Six Nations participation remains in doubt. The Leicester Tigers ace suffered a broken neck following a mistimed tackle on former England team-mate Nick Easter during an Aviva Premiership clash against Harlequins last April.

After his recovery took longer than expected, the 27-year-old returned to action for the Tigers in a Premiership clash with Worcester Warriors at the start of January and he has now been named in Stuart Lancaster’s elite player squad for next month’s Six Nations campaign.

However, Croft insists he is only concentrating on getting more match action under his belt with his club, and revealed that if he features in England’s Six Nations campaign at all, it will only be during the very late stages.

“After eight months out with my neck injury, and only playing 50 minutes of rugby, it is quite a shock to be involved,” said Croft on his England recall.

“Obviously the back row is a highly contested area in English rugby so to be kept in the squad is massive, but I won’t be rushing back. I need to get the injury right first to make sure I am fit enough and at the right level to play for my country.

“I won’t be available for the first few games and I’m probably looking more at the back end, if at all. The most important thing is getting back playing for Leicester and getting back to how I was playing prior to injury.

“England is blessed with a lot of depth in the back row so those boys will be playing and if I regain any sort of form it is then up to the coaches to decide when to put me in.”

SSE has launched Rugby Energy, supporting community rugby clubs by giving them advice on saving money on their energy bills. To kick start 2013 SSE are offering clubs £10,000 worth of kit.

For your chance to WIN just register on www.SSERugby.com and find out how your club can start benefitting.