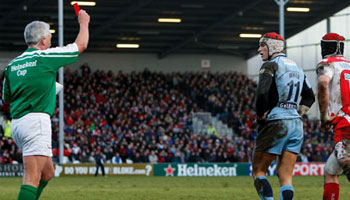 Cardiff Blues winger Tom James has been suspended for two weeks following the red card he received against Gloucester on Sunday.

Referee Alan Lewis dismissed James for headbutting Gloucester hooker Olivier Azam in the 27th minute, after Azam had given him a push in the back.

The Blues held on to claim a famous 16-12 victory, despite being a man down for the majority of the match at Kingsholm.

Following the sending off, the ERC disciplinary hearing in Dublin saw a threee-man independent panel determining that the offence was at the low-end of the level of seriousness for a strike with the head.

Having taken into account any mitigating and aggravating factors which would have been the aggressive manner in which Azam approached James, the committee suspended James for two weeks from the date of the match up to Sunday, February 1.

James will then only miss one match, the European clash against Calvisano at the Arms Park on Friday evening.

This clip includes a short interview with coach Dai Young after the match, who clearly saw the reaction of the victim as an influencing factor for the red card.