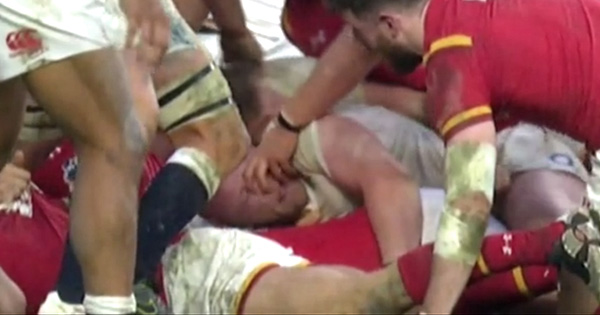 Wales prop Tomas Francis has been cited for the incident that had some fans and pundits up in arms during the Six Nations clash against England on Saturday. Francis appeared to make contact with the eyes of Dan Cole, but he was only penalised due to lack of evidence.

UPDATE: Francis has been banned for eight weeks for ‘recklessly making contact with the eye or eye area’. More info to follow

After referee Craig Joubert and his TMO chose to not card the prop due to insufficient camera angles, the Independent Citing Commissioner cited Francis for allegedly making contact with the eyes or eye area of Cole under Law 10.4 (m) – Acts Contrary to Good Sportsmanship.

As mentioned in commentary, contact with the eyes cannot be forgiven but it does appear that the main contact may have been a scraping motion across the nose, which we can possibly assume is what Cole was grimacing at. The finger did seem to at least touch one corner of the eye though.

The Disciplinary hearing for Francis will be held later this week.

The RTE panel in the video below were incensed however, feeling that Francis was definitely guilty and not only will he be in for a hefty ban, but they felt it was poorly handled by the officials.

England coach Eddie Jones said that there was ‘clearly a finger put in the eye’ but Wales assistant coach Rob Howley wasn’t convinced, saying that Francis was trying to clear someone out.

“When you look at it, his eyes are closed and I don’t think he knows what he’s doing,” said Howley.

What do you think, based on the one camera angle that was shown?