Tomas Lavanini suspended for a week for diving on tryscorer 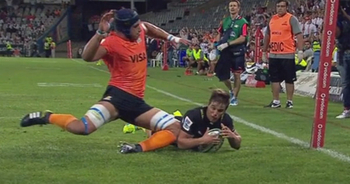 Newcomers to Super Rugby, Argentina’s Jaguares, had a good start to the tournament with a 34-33 victory over the Cheetahs. Discipline was an issue though, with a number of yellow cards in their first outing, and this incident involving Los Pumas lock Tomas Lavanini.

As the Cheetahs scored in a dominant first half, Lavanini dived into the ribs of home centre William Small-Smith for a 24-3 lead.

The Argentine second rower was spoken to by referee Stuart Berry and after the attempted conversion, the Cheetahs were awarded a penalty on the halfway line. Incidentally, Cheetahs flyhalf Fred Zeilinga missed both kicks.

Lavanini was cited and originally charged with 10.4(a) Punching or striking, but that was amended to 10.4 (g) Dangerous charging. A player must not charge or knock down an opponent carrying the ball without trying to grasp that player.

SANZAAR Duty Judicial Officer Nigel Hampton QC accepted a guilty plea from Lavanini, who has been suspended for one week. In his finding, Mr Hampton ruled the following:

“I found the offence to have an entry point in the low end range which starts at a two-week suspension.

“I did not consider there to be any aggravating factors to take into account. I did take the player admitting guilt for the offence into account as a mitigating factor. This entitles the player up to a 50 per cent reduction in sanction which I applied.

“This results in a one week suspension being imposed on the player.”

You can view the incident above as a loop, and a full video below