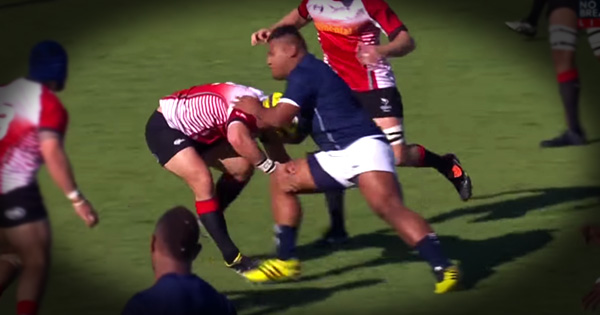 Taniela Tupou first came to prominence as a schoolboy in 2014 when a video of him went viral, and the nickname ‘Tongan Thor’ was coined. Since then he has gone on to put in some solid performances, resulting in a Super Rugby debut with the Reds.

Now playing in Australia’s National Rugby Championship, he wasted no time in letting his presence be felt in this past weekend’s match for Queensland Country against UC Vikings, as he made this almighty charge, sending hooker Robbie Abel flying.

It’s just another short example of the kind of power the young man has, making him one of the most exciting front row propects in rugby for quite some time.

Country went on to lose the match 58-20, but there were some great tries scored. You can catch up on those highlights on page two.

You can also view this awesome video of him in action for Brothers not too long ago.