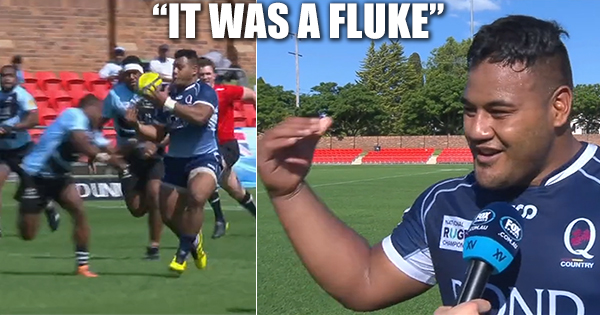 Just a week after representing the Barbarians against the Wallabies, Taniela ‘Tongan Thor’ Tupou played a huge role in Queensland Country defeating Fijian Drua 57-21 in Australia’s National Rugby Championship. Here is a look at his impressive contribution.

Queensland Country booked their spot in the NRC grand final due to a standout performance from tighthead Tupou, who rose to prominence in recent years due to footage of his barnstorming runs going viral when he was still at school.

Still just 21, the man affectionately known as Tongan Thor recently added to his list of growing accolades after he picked up a Barbarians cap against his adopted country. He was the one who went over for that disallowed try from the brilliant ball up the jumper trick play last weekend.

The 130kg Tupou started against the Fijian Drua in sensational fashion, busting the line off a set piece move before throwing a no-look over the shoulder pass to number eight Caleb Timu.

He wasn’t done there though, as they worked a neat lineout move that allowed him to charge over, and then later in the game his strong carry up midfield gave his side the impetus to score a nice try down the left flank. He then scored a more traditional pushover try from a few meters out.

Post game the Man of the Match was anything but how he appears on the field, coming across completely humble and almost looking embarassed by what he had performed, playing down that no-look pass by calling it ‘a fluke’.

“RUNNING IS A BONUS”

Tupou says that he has improved in the areas he lacked in the past, particularly up front.

“At school level I used to just run the ball. I couldn’t scrum, I couldn’t do anything but at this level if you can’t scrum, you won’t get picked. As a front rower that’s what you need to do – running is a bonus but the scrum is beginning of it all. Now that I have learned how to scrum and I’ve learned how to work around the park I’m enjoying my footy,” he said.

As for the Wallabies, the Tongan born powerhouse is staying level headed.

“I’ve always wanted to wear the gold jersey so whatever it takes for me to do it, I’ll do it. I wouldn’t move here for no reason. Even if I don’t get to play this year, next year – I’m only 21 – I know I have plenty of work to do and plenty of rugby ahead of me.”

With match stats of 17 runs, 10 tackle busts, four line breaks, one try assist, 124 meters carried, and two tries, you can be sure that Tupou is set to be a prominent figure when Queensland Country take on the Canberra Vikings in next weekend’s NRC grand final.

Below is a look at some of his best bits, with full match highlights under that