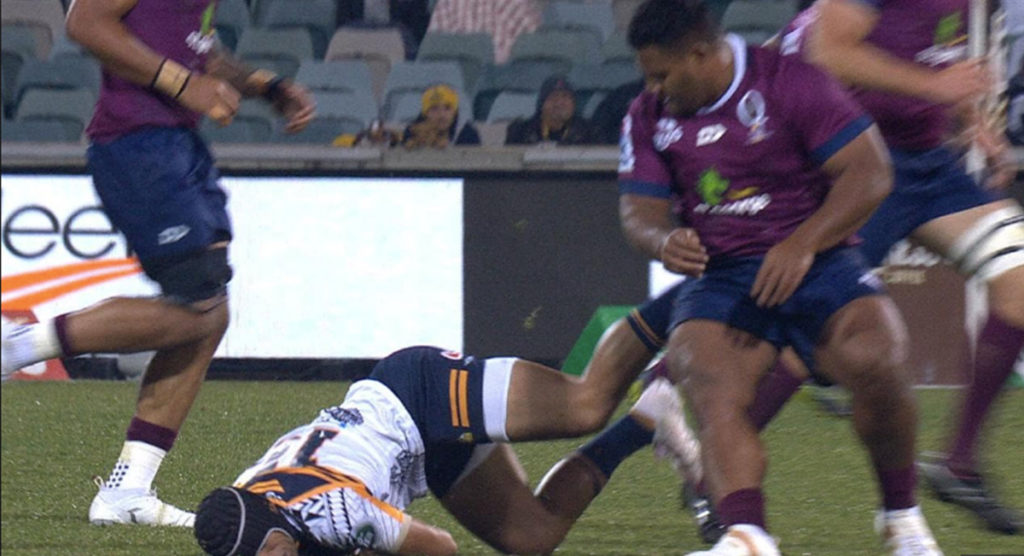 While the Brumbies beat the Reds 40-27 in Canberra, many fans were no doubt holding their breath when key playmaker Christian Lealiifano was left clutching his shoulder after being flattened by Tongan Thor in the first half. The tackle sparked somewhat of a debate.

The Reds grabbed a much-needed second try in the early stages only to have it cancelled out after tighthead prop Taniela Tupou had made a big shot in the build up.

Referee Paul Williams took issue with the height of the tackle, stating: “I’ve got nothing wrong with the timing but you could have tackled the player lower. You’ve gone high, there’s a lot of force, it’s very close to his head, so you’re lucky it’s just a yellow card.”

Not everyone agreed with the assessment. Both Tim Horan and Stephen Hoiles in commentary took issue with the card, as did Samu Kerevi, who told referee Williams that it was ‘shoulder on shoulder’.

“Of course there is going to be big force when you’ve got a guy like Taniela Tupou,” former Reds centre Horan said.

Hoiles agreed, stating that “Force shouldn’t have anything to do with it.”

Either way, the call stood and the effect was damaging for the visitors.

As for Lealiifano, he’s recently decided to call his time on his career with the Brumbies. The inspirational cancer survivor has been given an invite to the Wallabies camp for the World Cup, but will then be heading overseas for a stint with the NTT Shining Arcs in Japan.

Thankfully, the tackle was nothing too serious and he’s expected to be fit when the Brumbies host the Sharks in the Super Rugby quarterfinals.