Toulon grab bonus point try with time up against Lyon 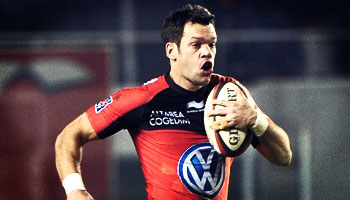 While the Heineken Cup is the biggest thing going on in the rugby world at the moment, the Amlin Challenge Cup chugs along with a few fascinating match-ups of it’s own. In Toulon we saw a fantastic finish to a game which kept the hosts in a strong position.

Firstly, no, Rugbydump is not turning French. It just happens that right now we’re getting a lot of timely contributions that come in that language. The majority of the time if the game is played there, it’s usually a good idea to post the host language anyway. Other times, it’s simply convenience and the fact that we’d rather post something than nothing at all.

To reiterate, if you feel like you can help out with contributions in the way of highlights or short clips of incidents, please do get in touch and become a part of what we consider to be the RD community of rugby fans worldwide.

This year we’ll be rolling out new sections on the site to include more videos and news from a greater range of teams, so if you’d like to get involved by helping out with only the club or country you’re passionate about, that’s fine too, as fairly soon we’ll have specific sections for each.

For now though, here’s a short clip of Toulon’s fantastic try at the end of their match against Lyon, where they actually scored two tries at the death to earn themselves a valuable bonus point.

Pierrick Gunther scored with a minute to play, Jonny Wikinson drop-kicked the conversion and then they launched their attack from deep, ending with a nice long pass from Wilkinson to Luke Rooney following some great passages of play.

The 29-10 effectively knocked Lyon out of the running but puts Toulon in the driving seat as they head towards qualification for the next round of play.