Toulon vs Stade Francais fight in the Top 14 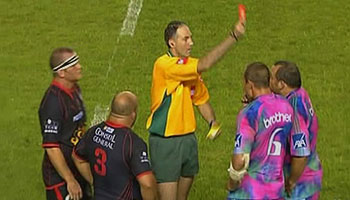 Tempers flared as Stade Francais consolidated their lead in the French Top 14 championship with a 19-13 victory at Toulon on Friday, with both teams playing the second half a man down.

Moments before half time a mass brawl broke out that had props Rodrigo Roncero of Stade Francais and David Banquet Toulon’s getting red cards from ref Jean-Pierre Matheu.

Toulon were already a man down as Jerry Collins had been sin-binned in the 31st minute for stamping, which must have had something to do with the new look of the Stade Francais jersey.

Although the fight started in the front row, and they received the immediate punishment, it was Toulon’s seasoned campaigner Norman Jordaan who landed a couple haymakers, knocking down two big guys in two seconds, something not often seen from a little number nine.

It was an ugly scene of mass chaos though, as both teams gave it a full go with little pods of brawls branching off, making it virtually impossible for the officials to regain immediate control.

The tension on the field boiling over was possibly a reflection of the feeling in the stands, as you could feel that something had to give. A few citings will no doubt be revealed in the next few days, which is unfortunate, because besides this crazy incident it was actually a really enjoyable match to watch.

“It was a complicated victory. Toulon made quite a few problems for us in the lineouts and our play in the loose was not precise. Without our good scrum and kicking performance, we would have been in even further difficulty” said Stade coach Christophe Dominici.

With the win, Stade Francais retain their hundred percent record after four matches, while Toulon left with a losing bonus point, and have yet to add to their solitary victory thus far in the season.