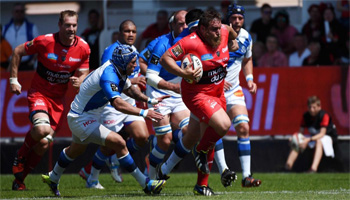 Prop tries are always a thing of beauty to be recognised here on Rugbydump. Toulon’s Xavier Chiocci scored an absolute classic front rower’s 5 pointer which has to be seen to be believed, as the European Champions defeated Castres 37-21 this weekend in the Top 14.

Castres were still revelling in their own score from a well executed grubber kick, capped off with an expert conversion from the touchline, when the Toulon loosehead prop gathered some unexpected possession after the ball was knocked down to him from the kick off.

With some open ground in front of him, Chiocci did exactly what props do in such a situation, he set off straight for the tryline. Three would be defenders were shrugged aside with powerful hand-offs as the 110kg monster ate up the yards, his eyes locked on the whitewash.

Forty metres later and Chiocci placed the ball over the Castres’ line amid raucous celebrations from the home support and his teammates, as Castres found themselves immediately trailing by eight points again, following the successful conversion.

Many sensational scores from the big men have featured on Rugbydump over the years. Chiocci now finds himself in the company of England legend Phil Vickery, who finished an amazing individual effort for Gloucester way back in 2002.

More recently in 2012, Bath prop Anthony Perenise ran in an impressive 30 metre effort, and although unable to touch down but well worth a mention, is Ben May’s efforts in 2008 when he came within inches of scoring one of the greatest prop tries of all time.