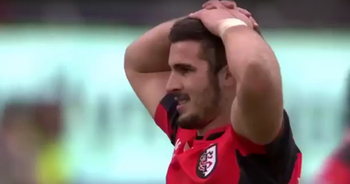 Toulouse had a disastrous end to a Top 14 match for the second week in a row after a late try set them up for a win against Brive, but their goal kicker failed to convert from directly in front of posts. The official’s decision divided fans, but the result stood: 21-21.

Kiwi Luke McAlister dived in with just seconds left in the match, taking Toulouse even at 21-21, setting up a simple conversion that would secure the win.

Sebastien Bezy stepped up to convert but replacement Jean-Baptiste Pejoine charged down the kick, that was taken from a mere 7 meters out.

“I don’t know if it’s better to laugh,” said Toulouse coach Ugo Mola, who thought a simple conversion would follow the vital try. “It could not have been more in front of the posts.”

Too close to the posts, Pejoine charged the kick and got a hand up, enough to stop the ball from heading over, switching all the attention to referee Pascal Gauzere. Consulting with his TMO, he felt that what Pejoine had done was legal, so ended the match as a draw.

Law 9.B.4 (a) states: All players of the opposing team must retire to their goal line and must not overstep that line until the kicker begins the approach to kick or starts to kick. When the kicker does this, they may charge or jump to prevent a goal but must not be physically supported by other players in these actions.

“I was cooler than my teammates,” said Pejoine. “And they asked me to stay focused. I looked at Bezy when he laid the ball, he was not too far back and I said ‘attempting the shot’.

Bezy himself said that everyone was disappointed to get that close and not take the win.

“It was up to me to take it back a bit to try to get it over. I looked at the ball and when I saw him go (Péjoine), I countered. I did not know if it was on track or not, but it seems to have gone right,” said a dejected Bezy. “When you get that close, everyone’s disappointed.”

Do you think the officials got this one correct?

On a positive note, at least it wasn’t as bad as this kick by Chris Paterson in 2011.

Wallabies captain Michael Hooper says the three players banned for breaking the team's alcohol protocols have already taken steps to win back the trust of the group.