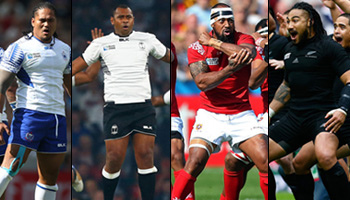 As rugby fans, there is nothing better than building up to a match with a fearsome war dance. This strong part of South-Sea Island tradition is now an intrinsic part of rugby and last weekend gave us an opportunity to witness four in action, as RWC 2015 got under way.

So why not relive them all? Above is a mix, but they’re worth watching separately here (or below).

First up was Fiji’s Cibi, performed against England in the opening game on Friday. It marked a switch back to the original war cry after introducing the Bole against Scotland in 2012.

Day two saw the Tongan Sipitau for their encounter with Georgia at Kingsholm. It didn’t have the desired effect as they went on to lose 17-10 to Milton Haig’s side. Nevertheless, it is clearly an impressive and passionate war dance.

On Sunday, Manu Samoa kicked off with their Siva Tau before they defeated the USA 25-16 in Brighton. And as if the Americans weren’t fearful enough of the powerful Samoans already, a pumped up Alesana Tuilagi led the aggressive war cry to set his team up in the right mood.

Capping off the weekend’s war dance action was New Zealand and their famous Haka. This year’s version features a noticeable inclusion, a steady right leg tap which looks as menacing as it is does rehearsed. The ‘V’ wedge is also a new feature.