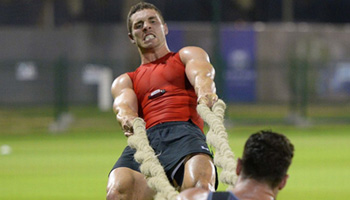 George North says that Wales’ pre-season training has been savage, as they prepare for the Rugby World Cup in the UK. Famed for training in unique conditions, this time Wales found themselves in the extreme heat of Doha, Qatar.

They have been training in temperatures that reportedly reach 40 degrees celsius, as training is combined with players sleeping in hypoxic chambers that can replicate conditions up to 4500m above sea level.

It’s believed that the combination of heat and altitude will improve the players’ performances in the cooler weather of the UK. The theory, according to the Welsh Rugby Union, is that more red blood cells will be produced, increasing hemoglobin mass.

So they should be fitter and able to train longer.

Before Doha they spent 15 days training at altitude in the Swiss Alps.

A trip to Spala, Poland, was cancelled because fitness expert Paul Stridgeon said that the squad are well ahead of schedule. Instead they will stay at the Vale Resort in the Vale of Glamorgan, which will offer them access to an altitude chamber, cryotherapy unit and indoor pitch.

“We are ahead of where we want to be and when we reviewed the first camp and the schedule it was felt our time would be better spent using the world class facilities on offer at the Vale.

“The altitude chamber, the heat stress option and the cyrotherapy chamber will compliment our first two camps well and remaining in Wales reduces two travel days which we can use to greater training effect. There will be a greater emphasis on the ‘rugby’ side of training at that point and we benefit more by staying in Wales,” said Stridgeon.

Thanks to the Welsh Rugby Union/WRUTV