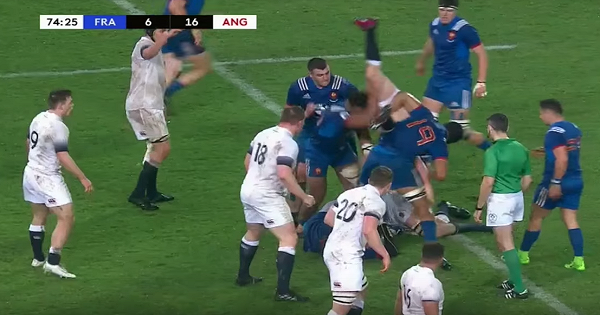 Shades of The Undertaker or The Dudley Boyz were on show during France U20s match against England, as two Frenchman were sent off for a horrendous clear out at the ruck.

With England centre Fraser Dingwall jackaling over the ruck, Hassane Kolingar and Pierre-Henri Azagoh lifted him upside down and drove him into the ground.

Comparisons with Tana Umaga and Keven Mealamu’s spear tackle on Brian O’Driscoll are clear to see, but this time two red cards were shown and it is doubtful that the pair will play again this season.

France had been well on their way to a Six Nations Grand Slam, but 16-6 down with five minutes to play it was clear that the French players were getting frustrated and this dangerous play was the result.

Its illegality was obvious, with Daniel Brennan, son of Irish legend Trevor, immediately putting his head in his hands, but luckily Dingwall was uninjured.

We are yet to hear about the obvious citings and suspensions, but will update accordingly.