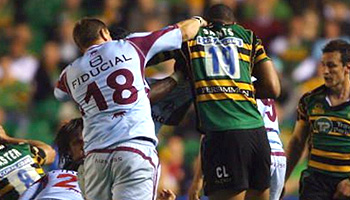 The European Challenge Cup final will be remembered as being one of the most fiercely confrontational matches of the season. The 15-3 win for Northampton Saints over Bourgoin was try-less, but was packed with action from start to finish.

Early on in the match it looked as though Irish referee George Clancy was struggling to control matters as the fiery French side got frustrated with his decisions. Saints had expected the match to be physical, and they got exactly that as niggle crept in.

Morgan Parra and Neil Best got themselves in a tussle shortly before halftime, resulting in Best receiving a messy looking black eye, and both players being shown yellow cards.

Later in the match, about 2 mins after Saints replacement lock Courney Lawes put in a huge hit that injured scrumhalf Parra, Bourgoin’s Thomas Genevois decided it was payback time and unleashed a punch on Lawes, which started another brawl.

Captain Julien Frier then landed a punch on Scottish prop Euan Murray, splitting Murrays eye and earning himself a meeting with the disciplinary committee, as he’s since been cited by the match citing commissioner.

Murray did well to refrain from retaliating, which would have surely jeopardised his British & Irish Lions tour, la Alan Quinlan.

Genevois was red carded, although he was determined to stop the ref from showing it, leaning towards the side of misconduct of a different manner.

Following the next lineout, another incident sparked a small scuffle again, as Lawes put in a seemingly late and unnecessary challenge over the dead ball line. He was penalised, but some thought it should have perhaps warranted further action.

It was a chaotic but enjoyable final that had moments that probably weren’t a great advert for the game of rugby. In terms of intensity though, it lacked nothing, which made for quite a spectacle.