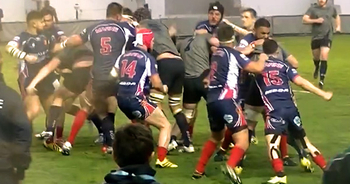 The Six Nations is over and England took the honours in the final match, beating France on Saturday, but last night in Toulon there was a beating of a different kind going on as both countries’ respective navies went toe to toe, and its safe to say there was no love lost.

The clash between the British Royal Navy and France’s Marine Nationale played host to arguably one of the worst all-in brawls we’ve seen for a long time.

Everyone was involved, including those from the substitutes bench, as chaos broke out in the ‘fight’ for the Babcock International Trophy.

It was in 2005 that the two sides started playing for the trophy, and despite the fighting, the match ended with the hosts winning it 28-6, squaring up the overall head to head at 6-6.

Picking players to send off would have been no easy task, but there were two red cards shown (a prop from each side) and then some time was taken for the referee to cool everyone down.

After the game the two sides posed for a photo, and spirits were high despite the all in fracas (Royal Navy were in grey, and the French navy in blue).

“It kicked off a bit during the match, but they calmed down and the match was finished. They all went for a drink afterwards and there were no hard feelings,” said a Royal Navy source.