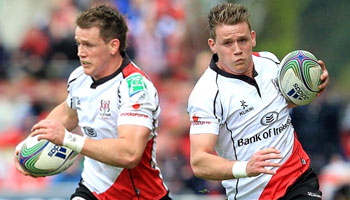 Young Ulster flyer Craig Gilroy finished off a classic try in the first half of their Heineken Cup quarter final against Munster at Thomond Park. In a weekend that produced some great moments, this was yet another that was much talked about.

Ulster surprised many and came away 22-16 winners over Irish rivals Munster on Sunday, seeing them through to the semi-finals of the tournament, where they will face Edinburgh.

Young winger Craig Gilroy scored the try of the game as he was given some space out wide and took every inch, beating Denis Hurley and a host of hapless defenders on the way to the line.

It looked as though Gilroy could have butchered the opportunity by not feeding the support, but the tackles from Munster fell off and he took full advantage to score a lovely Ulster try.

“Stefan put me away down the left wing. It was a good pass from him, and really it was a flash after that,” explained Gilroy. “I beat one defender, then managed to step inside again. I saw the try-line – I probably should have passed a couple of times – and went for it.

“It was right in front of me and I thought, ‘sure try’, then I saw Mafi coming for me. From the start of the season Brian (McLaughlin) has been telling me to transfer the ball and fend off. That was in my head and I managed to get over.”

There’s now mumblings of him being a candidate for Ireland’s tour of New Zealand in the summer.

“Who knows, I’ll concentrate on Ulster,” said Gilroy during the week, focussing instead on the win.

“It was very important for Ulster. Thomond Park isn’t an easy place to go and play. We’re delighted with the win. We believe we can go all the way. We have some of the world’s best players on the team, and playing alongside them is brilliant. I’m really enjoying that,” he said.