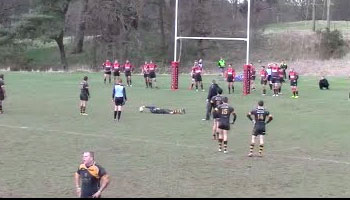 Currie RFC made it through to the BT Premiership Play Off last weekend after a last minute, 15-10 victory at Malleny Park. The circumstances in which the Edinburgh side bagged the win were not only dramatic, but downright bizarre.

After 18 phases of play, deep into injury time, Currie were awarded a penalty in front of the posts.

Fly-half James Semple, previously seen on RD throwing up after being tackled, opted to take the kick at goal, but in blustery winds, the simple attempt hit the post.

Semple then showed lightning reactions to re-gather the ball, before sending the ball out wide for winger Ruaraidh Smith to score the winner.

This comical episode is an example that every player – including the kicker on this occasion – should always chase a kick at goal. There are a few more great examples of that in the Related Posts.