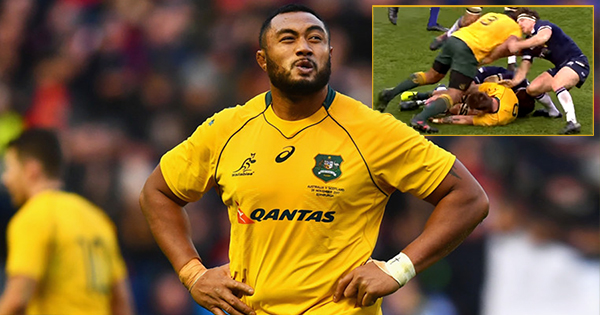 Wallabies tight head prop Sekope Kepu appeared in front of an independant World Rugby-appointed Disciplinary Committee today, following the red card he received for charging with his shoulder during Australia’s 53-24 loss to Scotland on Saturday.

Kepu, sent from the field by referee Pascal Gauzère in the 39th minute, was charged with infringing law 10.4(h): ‘a player must not charge into a ruck or maul. Charging includes any contact made without use of the arms, or without grasping a player’.

The 31-year-old accepted that he had committed the act of foul play and that a red card was just.

The Disciplinary Committee, chaired by Jean-Noel Couraud (France), along with former international players, Becky Essex (England) and De Wet Barry (South Africa), considered all of the available evidence and heard submissions from Mr Kepu and his representatives.

The Disciplinary Committee considered the relevant incident to have been a dangerous shoulder charge into a ruck in which contact was made with an opponent’s head.

In considering sanction, the Disciplinary Committee assessed the seriousness of Mr Kepu’s conduct and concluded that it had been in the mid-range of World Rugby’s scale of seriousness for that type of offending, which has an entry point sanction of a six-week suspension.

Taking account of Mr Kepu’s playing schedule (and in particular that the Southern Hemisphere close season is about to start), the Disciplinary Committee suspended Mr Kepu until midnight on Sunday, 4 March 2018.

View the full incident below