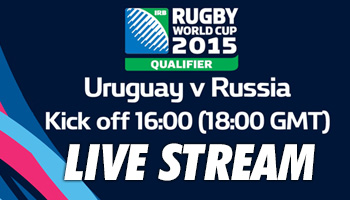 UPDATE: The match was shown here LIVE but you can now watch the full replay above

Today Uruguay and Russia meet in Montevideo for the crucial second leg decider to see who will qualify for Rugby World Cup 2015, to join England, Wales, Fiji and Australia in Pool A. The match will be streamed live around the world, with fans able to view the uninterrupted coverage right here.

Russia edged the first leg 22-21 two weeks ago in Siberia, so it’s all to play for today for both sides. After three years, 203 matches involving 83 teams and around 3,000 players, it’s down to 80 more minutes of rugby for that final position at England 2015.

If the two teams finish level on aggregate, the match will go into extra time to decide the winner.

“But there is only one point in it so both teams will fully believe they can do it.”

View highlights from the first leg

The IRB coverage starts at 19.00 BST (18:00 GMT, 16:00 local). Please note this stream not viewable in Uruguay (where it is televised), but available everywhere else.