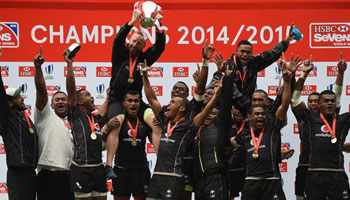 It was a historic weekend at the London 7s as the USA won a Cup final for the first time ever, beating Australia with ease in the final. Earlier Fiji had secured the overall title, for their first Sevens World Series win since 2006.

The USA finished sixth overall in the standings, having finished 13th last year.

“It is amazing, credit to those boys the 12 of them have been absolutely fantastic and there are about another 10 back in the USA that have worked their socks off all year, their work effort has been fantastic,” said USA head coach Mike Friday.

“I’ve said to them if you work hard in life then you get the rewards and they’ve been a credit to their country and their families and I’m proud of every one of them.”

Earlier two tries from Savenaca Rawaca secured Fiji’s win over South Africa in the quarter finals to clinch the series title for the first time since 2006 and only second-ever. Ben Ryan’s side went on to beat hosts England 26-12 in the third place play-off before lifting the title.

“I can’t really put it into words, we were just focusing on the South Africa game, but deservedly won and took the title,” said Ryan.

“The boys were very overly emotional in the changing room and I had to control them a bit and remind them to start smiling and that this is supposed to be fun. It was certainly a topsy turvy weekend. We wanted to go first day unbeaten and finish what we started in Gold Coast.”

With a record 116,219 fans attending the two days fans were treated to an enthralling finale which also saw New Zealand win the Plate, Kenya the Bowl and Japan, who will be replaced by Russia as a core side next season, lifting the Shield.

Highlights from Day Two below