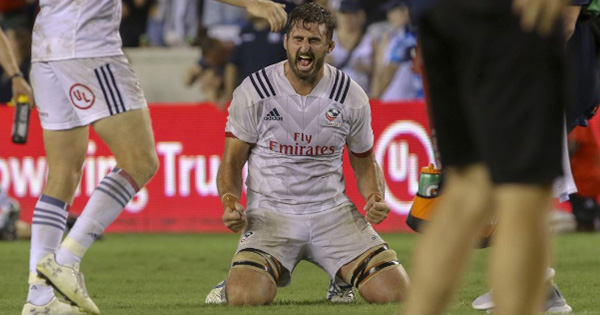 It’s taken several attempts, but the US have finally claimed their first victory over a tier one opponent. The match came down to the wire and ended in dramatic fashion with Scotland missing a last-chance conversion, sealing the match for the Eagles 30-29.

On a steamy night in Houston, the visitors looked to extend their winning ways over the US and were poised to do just that, taking a 24-13 lead into the break.

However, the Eagles got off to a quick start in the second half with a try from Worcester prop Joe Taufete’e and solid work from Sale Sharks’ AJ MacGinty.

The key moment for the US came midway through the second half. After some back and forth kicking, Scotland’s Matt Fagerson mishandled a MacGinty high ball, thereby allowing the chasing fly half to pounce and find Hanco Germishuys for the go-ahead score.

Scotland refused to go away, however, and after one dramatic disallowed try, finally went over for the score through replacement Dougie Fife.

All that remained was the conversion, with Blair Kinghorn’s kick set up to win the match…

This was THE moment.

Pundits will no doubt add qualifiers to the result but – make no mistake – this is a huge result for USA rugby. The Eagles have now won nine of their last ten matches, with the loss being by one point against Georgia during that stretch, another rapidly-rising tier 2 nation.

In terms of respectability, Major League Rugby and this signature win should help USA rugby to continue heading in the right direction. Hopefully, this will be a major turning-point.