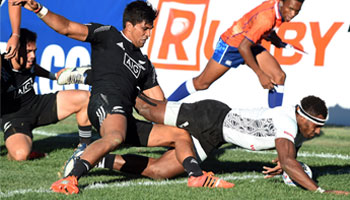 Fiji stunned Wellington Sevens winners New Zealand with a convincing 35-19 cup final rout at the USA Sevens on the weekend. There were some sensational tries scored over the course of the tournament, so here is a look at the best, plus highlights and more.

New Zealand were missing a few players due to injury but Fiji came out flying, thanks in part to the hoards of Fijian fans that took to the Sam Boyd Stadium in Las Vegas.

“It means a lot for us. We’ve talked about improving our defence and discipline and today it has paid off,” captain Osea Kolinisau said.

They raced off to a 21-0 lead at the break, before New Zealand scored 19 points in vain.

“I thought we came back brilliantly at the end to score 19 points,” said coach Gordon Tietjens.

Australia beat England to win the Plate, while France beat Argentina 29-5 to take the Bowl, and Canada eased past Samoa 26-10 to win the Shield.

The next tournament, the sixth of nine, is in Hong Kong on March 27-29. South Africa remain top of the standings with 93 points following their 31-0 third place play off victory over hosts USA.

New Zealand are in second place overall on 88 points, with Fiji two points adrift in third.

Below are Seven of the Best tries from the tournament, featuring some outstanding pieces of play (look at Brazil’s try!). After the jump you can see the highlights from the final day, including the knockout stages and the Cup final. Which is your favourite try?

Highlights from the final