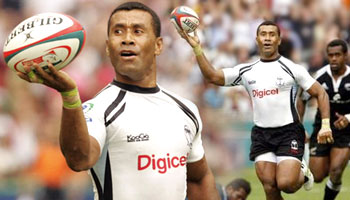 The 2013 Hong Kong Sevens kicks off tomorrow so to get you in the mood here is a look back at a thrilling moment from a great match in 2007. We first posted it after it happened, but the IRB have since got the great man himself to chat about it.

Believe it or not the Fijian legend was 38 years-old when he scored this sensational try. Perhaps you can believe it with the speed he moved at, but he still managed to beat numerous players on his way to helping Fiji reach the final with a 21-12 victory over New Zealand.

“Fiji and New Zealand are always competitive on the field,” said Serevi.

“I can remember that year when the score was close. I was just counting, one will tackle, one will get the ball, they need one guy. I was running from post to post, and was yelling ‘get it get it’.

“When I took the ball I saw two New Zealand players. I stepped one, and then stepped the second and just ran. They thought I will pass so I dummied and went again.

“Then I passed, he stepped, I went behind him, and he passed back. I ran like I was running from Fiji to Australia, I was so tired. It was a great game but it felt good when I scored the try.”

Fiji went on to lose to Samoa in the final, but that try was all everyone could talk about.

View our original post and a longer version of the try (with build up and replays), here