Wales get job done with win over determined Fiji in Cardiff

Wales were made to work hard for a 23-13 Pool A victory over Fiji at the Millennium Stadium earlier today. The win came about thanks to tries by Gareth Davies and Scott Baldwin, plus two conversions and three penalties from flyhalf Dan Biggar.

Fiji showed glimpses of their usual brilliance, with Vereniki Goneva scoring after a superb counter attack with some wonderful stepping and passing, but there were far too many errors.

They were strong at scrum time, but Wales were able to shut them down and despite not getting a bonus point win, Wales are in a good position with three wins from three matches.

England against Australia this coming weekend now becomes even more important. If Australia win, Wales will more than likely reach the quarter finals. If England win, then Wales will have to beat Australia in their final pool match.

There are plenty of permutations, for example if Wales and England finish on the same amount of points, Wales will go through due to them winning 28-25 last weekend.

It all gets a bit complicated so after Saturday we will have a better picture of what all sides need to do in the final round. For now you can see the Pool A table as it stands right now. 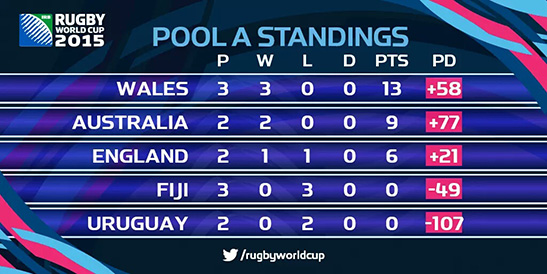 "As tough as it has ever been" - Wayne Pivac