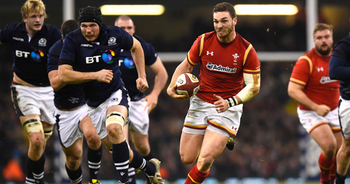 Wales beat Scotland 27-23 in what was arguably the Six Nations match of the weekend, with both sides scoring some excellent tries to entertain the packed house at the Millennium Stadium in Cardiff. Wales’ winning record against Scotland extends to 2007.

Gareth Davies scored a stunning early try that for all its quality, appeared to have been scored from an offside position. Scotland bounced back, scoring through ever-present Tommy Seymour.

Scotland led 16-13 midway through the second half before Jamie Roberts and George North crossed the whitewash with powerful tries. A late Duncan Taylor try proved consolation for Scotland, who will be frustrated with having come so close but failing to claim the win.

“That’s a bit better than last week, but you’ve got to give credit to Scotland. The way they’re playing they don’t deserve to be zero from two matches,” said Wales skipper Sam Warburton post match.

Injury forced Stuart Hogg, arguably Scotland’s most potent attacking threat, from the field but they stayed in the game and it was actually their set-piece that let them down the most.

“It was a Test match played against good opposition,” said coach Vern Cotter. “It is something that will be looked at and focused on. From game to game, there are always areas you wish to improve. We set our standards high and we would like to improve on that.”

Commenting on the Davies try, Cotter said: “I don’t usually get involved in this sort of thing but I thought, and I could well be wrong, that he was offside. But that is part of the game, everybody makes mistakes.”

As for Hogg, his injury will not be a concern, with the match against Italy in two weeks.

“It was a tough game. We had to dig deep and grind out a victory,” said Wales coach Warren Gatland. “There’s no easy game in this tournament. We have seen the improvement of all the teams in this competition.

“We had to use everything that we had in the tank to get out of that and to get the victory.”