Wales take on the Crossbar Challenge 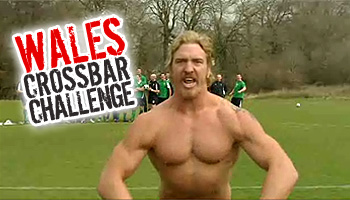 Its been a while since weve featured a Crossbar Challenge here on RD, so this week weve got one for you, even though its slightly different to what youre used to.

In this clip we see the original form of the Crossbar Challenge, as the Welsh rugby team make an appearance on Soccer AM, attempting to hit the top of the goal post with a football.

As you can see in the clip, fun was had by all, with many of the Welsh players showing the fun side of their characters. There are notable appearance by Andy Powell the warrior, Alun-Wyn Jones the workhorse, and midfield maestro Paul Scholes.

Kicking a football is clearly different to kicking a rugby ball, as many of them get it hopelessly wrong. Its all good fun though.

Stephen Jones, for those of you wondering, recited the longest welsh word, Llanfairpwllgwyngyllgogerychwyrndrobwllllantysiliogogogoch . It’s also the longest domain name in existence actually. Nice easy one to remember.