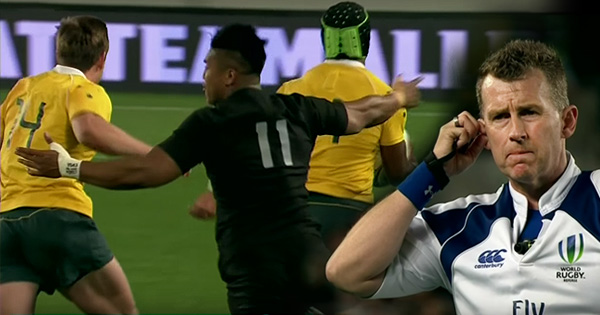 This huge call is still being discussed following the All Blacks’ 37-10 Bledisloe Cup victory on Saturday. At 15-10 down, Wallabies playmaker Bernard Foley set up what seemed to be a great try for Henry Speight, however, it was disallowed by the officials.

As flyer Speight got the ball after a lovely dummy and break by Foley, he raced ahead for a certain try. However there was some contact by chasing Wallabies wing Dane Haylett-Petty on Julian Savea, that may have slowed down the giant winger.

The try would have brought things level, with a successful conversion nudging the visitors ahead, but after Nigel Owens gave the initial try, a replay made the TMO double check it.

In the laws of the game, Law 10.1 states “Blocking the tackler – A player must not intentionally move or stand in a position that prevents an opponent from tackling a ball carrier.”

Referee Owens, regarded as one of the best in the game, got a lot of criticism from the Wallabies media, especially commentator Rod Kafer who said at the time, “Nigel Owens should never referee a Test match again, that is disgraceful. He is behind the ball, he can run where he likes.”

Before Foley took the conversion, TMO Shaun Veldsman said that he wanted to review the try. Owens agreed with Veldsman’s recommendation and awarded a block infringement, resulting in a penalty kick for the All Blacks and more significantly, no try.

Former top referee Jonathan Kaplan could not believe it, tweeting:

That is an absurd decision !! Poor Australia #NZvsAUS How can this happen at that level . the ref is complicit and accountable

Wallabies head coach Michael Cheika was furious with the decision during the match, and afterwards in the press conference he had an awkward conversation (view on page two) with the media, stating he will not make a comment until World Rugby do.

“Obviously I can’t say anything because they’ve got you by the throat.. I’ve just never seen shepherding from behind before.”

Do you think it was a try or not? Let us know in the comments below