Wallabies get elusive win with great comeback victory over the Springboks 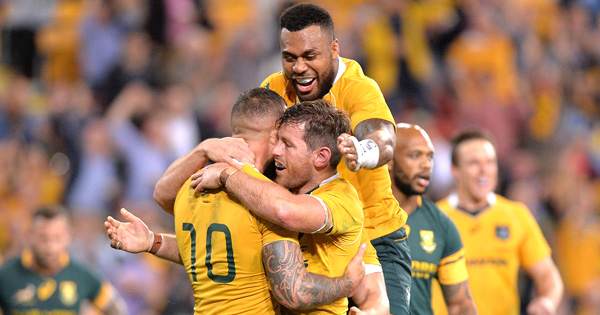 The Wallabies picked up a much needed win as they beat the Springboks 23-17 in Brisbane on Saturday, coming back from trailing 14-3 early on in the match. They now turn their attention to Argentina, while South Africa will face an even bigger challenge in the impressive All Blacks.

Bernard Foley proved the difference between the two sides after they both scored two tries apiece, but his quality kicking got the home side the win in front of 30,327 at Suncorp Stadium.

“The Springboks played well tonight. It’s always a tough game against South Africa,” said Wallabies skipper Stephen Moore. “We had a lot of opportunities and made a few mistakes but we’re happy to get our first win of 2016.”

Australia travel to Perth to take on Argentina next, while the Springboks face the All Blacks in Christchurch.

While the Springboks had some injury concerns and have called up Willem Alberts to replace injured lock Lood de Jager, number eight Warren Whiteley says that it was an improved performance but they need to cut out their error rate.

“There is a lot of work that’s been done to help us to reduce the errors, and we realise we have to do that when you play against the in-form side in the world at the moment,” said Whiteley.

“As a player you want to test yourself against the best in the world. There’s a great rivalry and tradition between the two countries and we have some players in our squad who will face them the first time.

“However, we are keen to address the finer details and to play much better as a team. As a squad we are positive and we will work hard this week to prepare for the weekend’s huge challenge”.

Meanwhile Australia’s Adam Coleman has a cut lip, so has been eating with a straw this week.

Catch up on highlights of Australia vs South Africa below