Wallabies notch up 50 in runaway first Test win against France 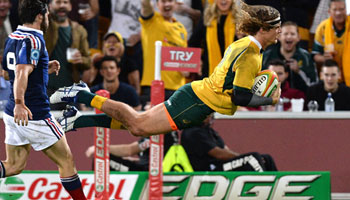 The Wallabies got their Test season off to an excellent start with a 50-23 thrashing of France in Brisbane on Saturday evening. They scored seven tries to France’s two, but will be concerned about the loss of captain Stephen Moore to injury.

“He is a class player,” said France coach Philippe Saint-Andre when referring to fullback Folau.

“He’s a match-winner. He showed that tonight. Australia were very strong in contact and won 70-80 per cent of the collisions. They were physical with a lot of urgency, and we panicked too much.”

Hooker Moore limped off early with a medial ligament tear, so will be out for a large part of the year, while debutant Sam Carter is out for the series with an ankle injury that he played through.

“I thought he’d (Moore) done a brilliant job even prior to this week. He and I had worked pretty well. I was pleased with the progress we were making off the field,” said coach Ewen McKenzie.

“It leaves a bit of a void, because we had a lot of stuff in the pipeline and his priorities now change to rehabilitation and getting back, and we have to keep playing.”

Moore will undergo surgery today, then start the long road to recovery. “There’s nothing you can say, you go into the time warp required for it to mend. The surgical side becomes the priority and you get on with it. He’s a pragmatic guy but emotionally, he was obviously shattered.”

France and Saint-Andre need to regroup quickly if they’re to avoid a 3-0 whitewash down under.