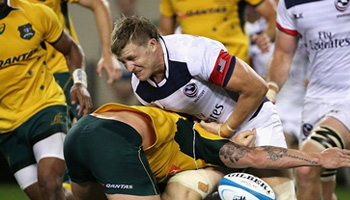 The Wallabies notched up a 47-10 victory over the USA Eagles in their World Cup warm-up match at Soldier Field in Chicago this past weekend. The home trailed by just four points at halftime, but the Wallabies powered through the second half for a big win.

Young Sean McMahon, who has been out with injury for a lengthy period, scored his first Test try and produced a man of the match performance, while other tries were scored by Bernard Foley, Nick Phipps, Dean Mumm, Kurtley Beale, Quade Cooper and Taqele Naiyaravoro.

The Eagles scored a stunning try through scrumhalf Mike Petri and a lovely Zee Ngwenya run, while the bets from the Wallabies was probably Kurtley Beale’s, that came from way back in their own half.

Wallaby skipper on the day, James Slipper, praised the opposition.

“It was a good win. We came here to win. We ended up doing that. Proves how good the Eagles are. They came out in that first half and played some really great rugby. They’re going to go far in the World Cup. Credit to them. Both teams showed physicality,” he said.

The Wallabies didn’t concede a point in the second half, which will please coach Michael Cheika as they get ready for a tough Pool A at the World Cup. They open their tournament against Fiji on September 23, while the USA face Samoa three days earlier.

The tries are below, while longer, US commentary highlights can be viewed on page two