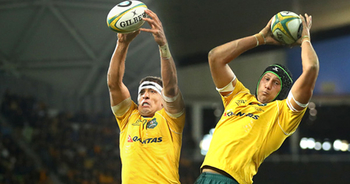 Michael Cheika has made two changes to his starting Wallabies side to face Argentina at Twickenham Stadium in London. The match is the first of it’s kind, with the Rugby Championship taking to the northern hemisphere for the first time for this once off.

Melbourne Rebels backrower Lopeti Timani comes in at number 8 with club teammate Sean McMahon out with an ankle injury. It will be Timani’s first start in the gold jersey after making his debut off the bench in Australia’s 36-20 win over Argentina in Perth last month.

In the other change to the starting fifteen, Brumbies lock Rory Arnold returns in place of Rob Simmons to partner Adam Coleman in the second row. The monster locks will form the tallest second row combination in Wallabies history, with Coleman 2.05m and Arnold even taller at 2.08m.

The Rugby World Cup 2015 semi-final replay, being played at the same venue as last year’s clash, will also mark a special occasion for captain Stephen Moore, who will equal George Smith as the fourth most-capped Wallaby in history, when he runs out for his 111th Test.

Cheika has named an extended bench with Leroy Houston in line for his Test debut, hoping to become the 11th Wallabies debutant of 2016.

The Queensland Reds number 8, currently playing for Bath in the English Premiership on a medical loan, earned a late call up this week with injuries depleting Australia’s backrow stocks.

The Wallabies hit the cryogenic chambers