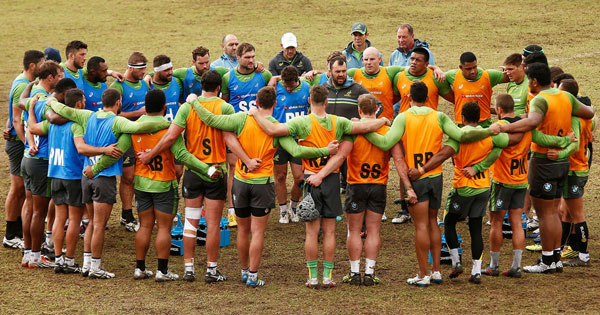 Wallabies Coach Michael Cheika has named an experienced 33-man squad for the Rugby Championship and Bledisloe Cup, that kick off later this month. Following a disastrous England series, the Wallabies are looking to bolster up the squad ahead of a tough challenge.

The squad has been strengthened by a legion of experienced French-based Test campaigners, with Matt Giteau, Drew Mitchell, Adam Ashley-Cooper, Will Genia and Quade Cooper all named in the squad as the men in gold look to defend their Rugby Championship crown and end a long-standing Bledisloe Cup drought.

The Rugby Championship will be Cooper’s first stop on his comeback to Australia ahead of a Super Rugby return in 2017 following a brief stint with French powerhouse Toulon, where he linked with fellow Wallabies Giteau and Mitchell for the 2015/16 Top 14 season.

Fellow French-based star Will Genia will take his first steps on the comeback from a knee injury which has kept him out of Rugby since January, while utility back Adam Ashley-Cooper will look to add to his 114 Test caps after returning from Bordeaux.

The five foreign-based players are hungry for more success in the gold jersey having played an integral role in the Wallabies’ run to the Rugby World Cup Final in England last year.

All four uncapped players included in Cheika’s initial train-on squad – Allan Ala’alatoa, Reece Hodge, Tom Robertson and Lopeti Timani – have been retained in the final 33-man squad ahead of the four-nation tournament.

Three debutants from the recent England Series are also in the running to add to their Test tally with Samu Kerevi, Adam Coleman and Dane Haylett-Petty all named to join the squad at its training base in Terrigal on the NSW Central Coast next week.

Lock Kane Douglas is in the squad for the first time in 2016, after returning from a knee reconstruction, while his second row partner Rob Simmons has also made his way back from a shoulder injury which cut short his Super Rugby campaign.

Kurtley Beale, Rory Arnold and Joe Tomane were not considered for the squad because of injury.

The Qantas Wallabies will open their Rugby Championship and Bledisloe Cup campaigns against New Zealand at ANZ Stadium, Sydney, on Saturday, August 20. Tickets for the clash are available through Ticketek.