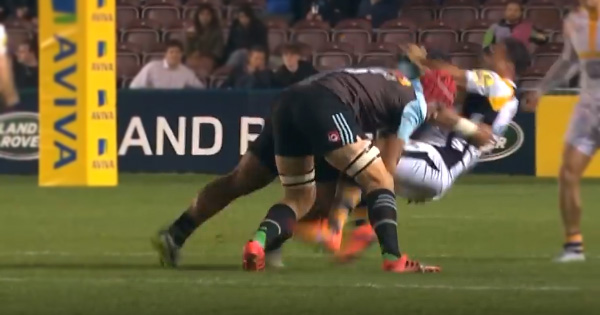 Wallaby legend George Smith made his debut for new club Wasps on Friday night, after earlier this year signing from Lyon in France. The 111 Test veteran was part of a losing cause against Harlequins, and got his bell rung with this massive double tackle from the ‘Quins forwards.

Number Eight Mat Luamanu and Lock Sam Twomey combined to crunch the former Brumbies and Toulon flanker, knocking him to the floor with a perfectly timed tackle.

In typical George Smith fashion, the now 35-year-old simply popped up and raced to the next ruck.

In the same match, prop Marler made a big hit himself, but that was late and off the ball. The referee had a word with him, to which he frankly explained that he was frustrated because he’d just been knocked out of the Rugby World Cup with England! Watch that clip here.

View more of Smith, both dishing out and receiving some big shots, in the Related Posts