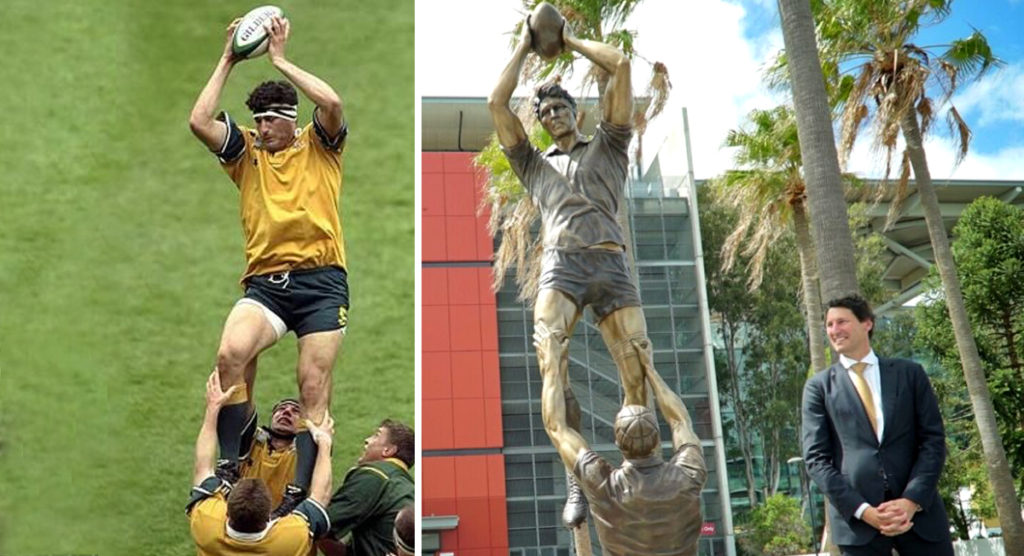 The Queensland Rugby Union (QRU) have honoured Queensland and Wallabies great John Eales with a statue at Suncorp Stadium in Brisbane. The giant bronze sculpture is the first rugby union statue to be erected at the stadium.

Dignatories and an array of former Wallabies and Reds players were on hand at the unveiling ceremony.

John Eales said: “I certainly don’t see this as an individual accolade. I see this as a representation and celebration of the wonderful history of Rugby Union in Queensland.”

Rugby Australia CEO Raelene Castle said: “John Eales is an icon of our sport and it is only fitting that he is now forever enshrined here at this iconic venue in his beloved home of Queensland.

“The statue is symbolic not only of John’s extraordinary career and influence in Rugby, but also the game’s deep history and connection with the people of Queensland. It represents every Rugby player who has taken the field to represent their club, school, town, State, or Country.”

Eales felt a little uncomfortable with the situation, but was pleased with what it does for Rugby Union.

The ceremony also doubled as the St.George Queensland Reds official 2019 season launch ahead of their first home match on Saturday evening against the Crusaders at Suncorp Stadium.

Reds head coach and fellow World Cup winning lock Brad Thorn said: “John is a proud Queenslander and a humble man. He’s achieved outstanding success in maroon for Queensland and in the green and gold for Australia and this statue is recognition of this.”

Beetson, Meninga and fellow Queensland Rugby League greats Darren Lockyer and Wally Lewis have statues already situated in the Northern Plaza, while Eales’ sculpture sits on the opposite side of Suncorp Stadium in the Southern Plaza.

A proud Queenslander, Eales is Australia’s most successful Rugby captain. His stature in Australian Rugby is so grand, the award for the Wallabies’ best player each year is named after him – The John Eales Medal.