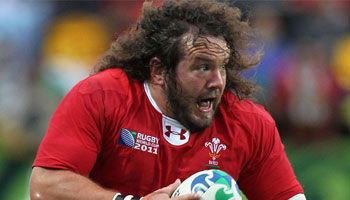 Wales and British and Irish Lions prop Adam Jones has announced his retirement from international rugby. The 33-year-old Cardiff Blues player notched up a highly impressive 95 caps for his country and won three Grand Slams. He hasn’t been picked for the Six Nations.

Jones last played for Wales in their 38-16 defeat by South Africa in June 2014. He has told the Sunday Times that he felt like things started going downhill a little before that though.

“It started when I got dropped for the last game of the 2014 Six Nations (against Scotland),” Jones explained. “I was still pretty happy with the way everything was going and I was thinking I’d get back in. Then there was the ’30-minute match’ in South Africa.”

He was then overlooked for the Autumn Internationals in November. He says that he made his mind up before Christmas that if he was not chosen in the Six Nations squad, he would retire.

“It’s obviously not the way I would want to finish, it’s not how I planned it in my head, and I hope no-one thinks I am simply quitting,” he said.

His Lions tours of 2009 and 2013 included 5 Test appearances, which takes his overall international tally to 100 caps. He will continue playing for the Cardiff Blues.

Wales coach Warren Gatland has offered his best wishes to Jones, thanking him for the contribution he made to Welsh rugby.

“I want to thank Adam for his achievement in winning 95 caps for Wales and earning five test appearances for the British and Irish Lions,” said Gatland.

“There is no doubt that Adam has played a huge part in Wales’ success.  He has three Grand Slams and a Championship to his name. That is an unbelievable record.

“He made a big impact and contribution on the international stage and we all wish him well for his future career with the Cardiff Blues.”