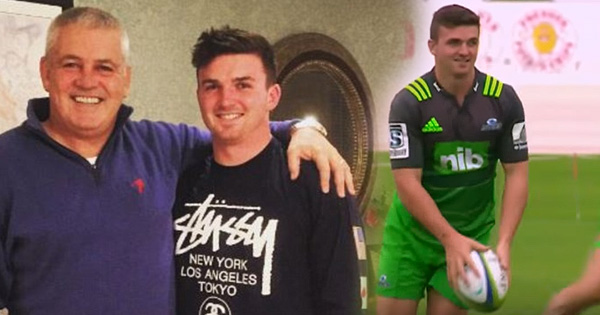 Young flyhalf Bryn Gatland is set to make his first Blues appearance in Super Rugby this coming weekend, a moment that could set in motion a strange series of events. He is the son of British & Irish Lions coach Warren Gatland, who will face the Blues in June.

Young Gatland was called into the Blues squad as injury cover after flyhalf Ihaia West was ruled out for four weeks after sustaining an ankle injury against the Western Force.

Bryn, who plays for North Harbour, is likely to be drafted onto the bench, with Piers Francis expected to start at ten against the Highlanders in Dunedin.

The 21-year-old had been training with the Crusaders after not having been selected by any of New Zealand’s five Super Rugby sides. Blues coach Tana Umaga then called him into the side.

“It is a bit strange being flown all over the country,” Gatland told the New Zealand Herald on Tuesday. “It is tough being an injury replacement as you don’t have any certainty or stability. One minute you are in, the next you are out.

“If I get a chance to get on the field I’ll do what I can to put my best foot forward. You see it all the time, someone gets a little bit of an opportunity, they do well and it all works out for them.”

If things go well, that sets up a possible meeting with his father, when the Lions tour New Zealand.

“It has been mentioned about a million times,” a grinning Gatland told TVNZ. “I can’t look that too far ahead but it would be awesome.”

Right now the father-son meeting is all speculative, but it would make for a great story.