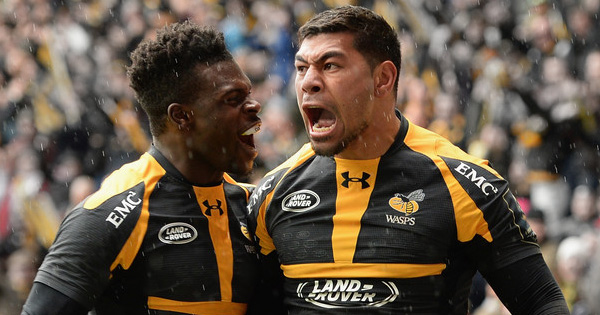 Wasps came from behind to snatch a thrilling 25-24 victory over Exeter Chiefs in their European Champions Cup Quarter Final at the Ricoh Arena. The match ended with high drama, as the hosts’ relentless pressure was rewarded.

Kiwis Frank Halai, Charles Piutau and Jimmy Goperth were the stars of the final quarter, but it took a phenomenal team effort to book them a place in the semi finals.

Exeter had scored three tries, including two from Thomas Waldrom, and looked in command with a 24-11 lead and pressure on the Wasps tryline. But a turnover and a brilliant break from Elliot Daly (see video above) set up an incredible few minutes of rugby, culminating in a try for Halai.

At 24-18 and time just about up, Wasps struck through All Black Piutau, finishing the game with drama as Gopperth needed to slot the kick to win it. He did so without a hitch and Wasps took the victory, sparking victorious scenes while breaking the hearts of Exeter Chiefs fans and players.

Gopperth, who previously played and Leinster, Newcastle, the Hurricanes and the Blues, said that it was possibly the biggest pressure moment of his career.

“Those are the moments you’ve got to nail, and I’ve never had one as big as this. We know we’re a good attacking team, we just had to get the opportunities,” said the 32-year-old.

Skipper James Haskell had been substituted so had to watch from the sideline.

“I had my coat over my face but I had to watch the kick. I’m the last one standing of the old set of Wasps boys, and creating memories with this team is what it’s all about. It’s a wake-up call, we can’t leave things down to the wire,” Haskell said.

Exeter Chiefs coach Rob Baxter was realistic about the fine margins in sport. “Both teams were justified in winning the game, and we’ve made a good Wasps team play very well to beat us.”

The epic Halai try can be viewed at the top, then the winning try and conversion, and if you could like to view and extended highlights video (14:42), you can see that below