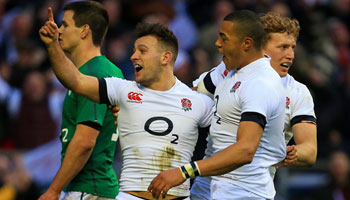 We’re just one set of Autumn Internationals and a Six Nations tournament away from the 2015 Rugby World Cup. Come September 18th next year, there will be 20 nations battling it out for the ultimate prize in rugby union.

With expectations high, can hosts England match their victorious RWC campaign of 2003?

In short, the answer is yes. The 2015 World Cup offers England a very realistic chance of lifting the Webb Ellis Cup. The side are currently third favourites with Titan Bet but expect their price to shorten once the tournament edges closer. The main advantage England have over their competitors is home advantage.

In the 2011 World Cup in New Zealand, the Kiwis were victorious, whilst in 2003 hosts Australia were beaten finalists. Back in 1995 South Africa harnessed home support to win the competition, so there is a clear correlation between home support and overall success.

With the supporters behind them, England will be able to step it up a gear. Southern hemisphere teams and biggest rivals New Zealand and South Africa will not be able to call on a large portion of fans to lift them when they are in a rut.

If England, and they should, utilise the home support to its fullest, then they will be the most intimidating side in the tournament, as well as the most formidable.

The preparation that coach Stuart Lancaster has put into this England side is testament to their chances. Replacing Martin Johnson after England’s woeful World Cup in 2011, Lancaster made it clear that he would build a team capable of winning the World Cup, and that is what he has done.

He immediately axed the deadwood in Johnson’s side and set about bringing through the highly promising youngsters. He assembled a side for the 2012 Six Nations and has since stuck with it.

The advantage of this is that this side has matured together; they know one another inside and out and have an intricate knowledge of their teammates’ playing styles, which in turn allows England to play free-flowing, attacking rugby.

If we look at England’s 2013 Six Nations performance, we can see that they are going to be in with a shot. Their 29-18 dismantling of Wales was brilliant, while Lancaster would have been very pleased with his side’s gritty win over Ireland.

They were unfortunate against France in the opening game and if they hadn’t conceded late they would have pulled off a Grand Slam.

The most promising reason for England winning the World Cup would be the fact that all their players will be at their peak in 2015. Courtney Lawes, who was brilliant in the Six Nations, will be a seasoned international and as such will hold his own in the second row.

Mike Brown on the wing will be at the very top of his game and this should frighten the opposition, while Chris Robshaw would have developed into a fantastic captain.

To conclude, the Webb Ellis Cup could be be staying in England after the 2015 World Cup.

Lancaster has created one of the most cohesive squads in World Rugby and by 2015 most of his players will be playing to the best of their abilities, and they will also be blessed by the invaluable home support.

This is the best England side since 2003 and it would be an injustice if they cannot emulate the achievements of that side.