Will Skelton's yellow card for no-arms charge against Scotland 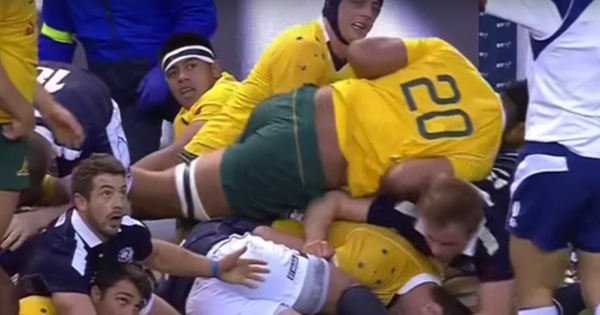 One of the main talking points from Australia’s narrow 23-22 win over Scotland at Murrayfield last weekend was the sin-binning of Wallaby second-row Will Skelton late on. The incident happened in the closing stages of an enthralling game during a period of extensive pressure.

Referee John Lacey had already blown his whistle for an Australian penalty when Skelton, standing at 6ft5 and 22st led a no-arms charge into the ruck, striking opposite number Jonny Gray.

Why Skelton felt the need to do such a thing that late on is probably something only he knows. Needless to say, Lacey referred the incident to the TMO and subsequently brandished the deserved yellow card.

World Rugby have stated previously their aim to rid such actions from the game, however they do still crop up with a degree of regularity. The same weekend, Samoa’s Logovi’i Mulipola was penalised for a similar charge in their match against France.

What are your thoughts about the Skelton incident? Do these need to be sanctioned more harshly?