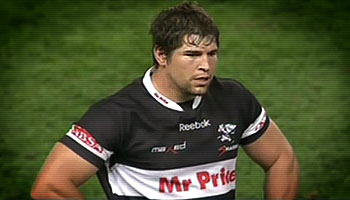 A few days ago I posted the Currie Cup best tries mix from this past weekend. Included in there was the game between the Sharks and the Lions in Durban, which the Sharks won 48-19. Here’s a look at one of the biggest hits of the weekend, which came from that match.

The Sharks have been spoilt for loose forwards of late, with the likes of Ryan Kankowski, Jean Deysel, Jacques Botes, Keegan Daniel, young talent Michael Rhodes, and now this season, big Willem Alberts.

Alberts moved to the Sharks this year after spending a few seasons with the team they faced on the weekend, the Lions. His impressive form in last season’s Currie Cup, coupled with his size – 1.92m and close to 120kg – made him a much sought after signing and since arriving in Durban, he hasn’t disappointed.

His potential and physical presence have already had some predicting a step up to higher honours in the not too distant future. His ball carrying ability and physicality in the tackle have been a real feature of his play.

Nineteen year old Lions fullback Jaco Taute, himself a promising prospect, found out first hand what a unit Alberts is as his counterattack soon came to naught, with the Sharks number eight smashing him dead in his tracks.

He was actually penalised for the hit, but as captain Stefan Terblanche said, Alberts did attempt to grasp the player, so the impact probably made it look more illegal than it actually was.

You may notice the new ‘ Like ‘ and ‘ Tweet ‘ buttons below the video. Please try them out to share posts with your friends and followers on Facebook and Twitter. I’m still tweaking the layout so if you have any feedback, please get in touch . Thanks!