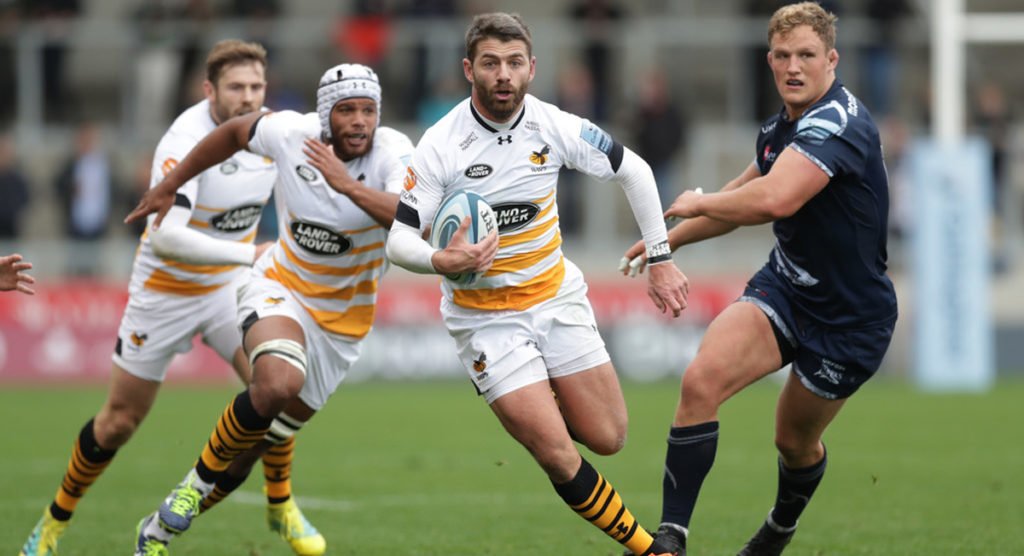 Despite having travelled all the way back to the UK after the Springboks’ famous win over the All Blacks in Wellington, Willie le Roux will turn out for the Boks against the Wallabies in South Africa tomorrow. He showed fine form on his return, setting up this lovely Wasps try.

The Springboks will be hoping that the toll of all the long haul flights won’t have affected the dynamic fullback, who played a large part in the courageous 36-35 win over New Zealand. He wasn’t afforded a break though, instead heading back to his club.

Le Roux has stated that last year he thought his international career was over, so moved to Wasps. He missed the full international season, but his form has warranted his selection and under Rassie Erasmus he now plays a key role in the Springbok game.

Against Sale Sharks last weekend he showed how dangerous he can be with ball in hand as he featured twice in a neat backline move that ended with a try for another former Bok, Nizaam Carr. It was named Try of the Week in the Premiership.

While it was originally thought that he would be unavailable for the final two Tests of the Rugby Championship, an agreement with Wasps was reached and Le Roux is now also available for the Pretoria Test against New Zealand.

“We didn’t expect him to be playing. I’d be lying if I said that. Willie felt his international career was over when he came here, we had those discussions,” Young told CoventryLive last week.

“The reality is, not everything is for the media,” said Young this week. “We’ve spoken to the South Africa management consistently over the last three or four months. Going back to June there was some plans put in place that have been adjusted due to injuries, results so on.

“What was discussed, that plan has been slightly different. Both sides understand that and both sides get on with it. There certainly hasn’t been any fall outs. The discussions have been no different with Eddie Jones or anyone else.”

The try again, including the build-up to it:

Catch all the weekend highlights on @channel5_tv on Monday. pic.twitter.com/zGC5p4wCCp

“Willie adds great value to our side and he is one of our most experienced players,” Stick said.

“Before the New Zealand match, I said that if Willie, Faf de Klerk and Handré Pollard make the right decisions the chances are that Aphiwe Dyantyi will be man of the match. I said that because of the leadership of those three players and it showed on the field.

“Once you have Willie and those other guys on the field with their leadership, you have a better chance to win against any team in the world. That was the case against New Zealand. The more leadership players in the squad the better our chances of winning.

“We are excited and looking forward to playing on Saturday and we know Australia are hurting (after their loss to Argentina). The Boks are not going to underestimate them. We are looking to give our people the win they are looking for.”