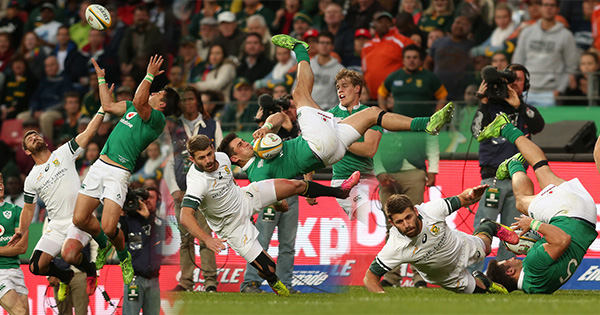 Springbok fullback Willie le Roux pleaded guilty to breaching Law 10.4 (i) – tackling a player in the air – after he was cited following his yellow card during the South Africa vs Ireland third Test in Port Elizabeth. Here is another look at it, PLUS some other similar incidents.

The Springboks hung on for a 19-13 victory, but early in the series decider Le Roux challenged for a high ball but came up short as he missed the ball and collided with Tiernan O’Halloran.

O’Halloran got up extremely high so the contact caused him to flip and land dangerously upside down, thankfully and luckily not causing any serious injury.

Glen Jackson referred to his TMO and they concluded that Le Roux was not in a position to catch the ball, and O’Halloran landed on his upper back/shoulders, so yellow card.

Irish fans were fuming with just the yellow, as they felt this deserved a red card.

The Springbok fullback was later cited by James Absaloms of Kenya, before judicial officer Terry Willis (Australia) heard the case in PE on Sunday. He found that the relevant entry point for the offence was at the lower end and felt that a one week suspension was appropriate.

As the Test series has now concluded, Le Roux will miss the Super Rugby match between his team, the Sharks, and the Lions on this coming Saturday, 2 July.

Law 10.4 (i), for which Le Roux was charged states the following:
Tackling the jumper in the air. A player must not tackle nor tap, push or pull the foot or feet of an opponent jumping for the ball in a lineout or in open play.

This is an area that World Rugby needs to thoroughly address as both players and fans, and often referees, seem to be unclear on exactly what the outcome should be in any given situation. The contrasting opinions on Saturday, and indeed in recent weeks, have been quite incredible to see.

In this case both players were contesting for the ball – leaving the ground with near identicial timing – and one could say that they were both equally at risk of injury.

There was one clear winner though, and unfortunately he landed horribly. Luckily for both parties he didn’t land directly on his head, which is what helped Le Roux on the day.

Perhaps the main takeaway from this particular incident is that if you’re going to challenge for a high ball, make sure you get it, otherwise there is a good chance that you will be either red carded or suspended if you make any contact at all with the opposition.

Scroll to the very bottom for a full video, but below we’ve looked at some similar incidents, giving you a chance to peruse and compare the on-field and disciplinary hearing sanctions.

SIMILAR MID-AIR INCIDENTS (may take some time to load)

Fans and media immediately drew comparisons to the controversial Stander red card from the first Test, when he was sent off for knocking out Pat Lambie as part of an attempted charge down.
DISCIPLINARY: Red card and one week ban

Le Roux was actually on the receiving end of a very dangerous challenge himself earlier this year when he landed horrifically after Jason Emery flew into him.
DISCIPLINARY: Red card and four week suspension

Two years ago Ireland fullback Jared Payne was shown a straight red card just four minutes into a Heineken Cup Quarter Final, after he collided with Alex Goode. His eyes were firmly on the ball but referee Jerome Garces was firm in his decision.
DISCIPLINARY: Red card and two week ban

We also recently saw plenty of discussion surrounding the Waisake Naholo and Liam Williams midair collision, where many Welsh fans felt that Naholo should have been at least yellow carded.
DISCIPLINARY: Penalty, no card or ban

In May this year Leolin Zas was also shown a straight red card when he slipped just before competing for a high ball, causing Waratahs number ten Bernard Foley to land awfully.
DISCIPLINARY: Red card and two week ban

Anthony Watson was the subject of controversy in another high ball incident with Alex Goode, after he was sent off after clumsily clashing into the Saracens fullback in April.
DISCIPLINARY: Red card and two match ban (also to do with verbal abuse)

There are one or two more in the Related Posts too, so have a look and let us know your thoughts