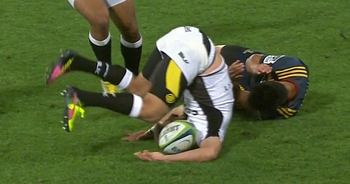 Sharks fullback Willie le Roux was extremely fortunate to come away unscathed from a challenge that saw him land terribly, as the Sharks edged the Highlanders 15-14 in Dunedin today. Jason Emery took the Springbok out in the air, so was shown a red card.

Emery has since been cited for contravening Law 10.4 (e) Dangerous Tackling – Tackling a player who’s feet are off the ground.

Emery was never in a position to make a catch but instead took Le Roux’s legs out, creating a dangerous situation. While it clearly wasn’t malicious, it was reckless and the way Le Roux landed is exactly why these types of challenges are heavily policed nowadays.

After consultation with the TMO, and despite the opinion of the man in the booth, referee Ben O’Keefe made the decision to award a deserved red card.

@JasonEmery13 bro all part of the game we love all the best to you and the team for the rest of the tournament ????????

A SANZAAR statement with details of the next steps has just been released, so Emery will face a mandatory disciplinary hearing following the sending off.

Le Roux left the field for a concussion test but returned after getting the all clear.