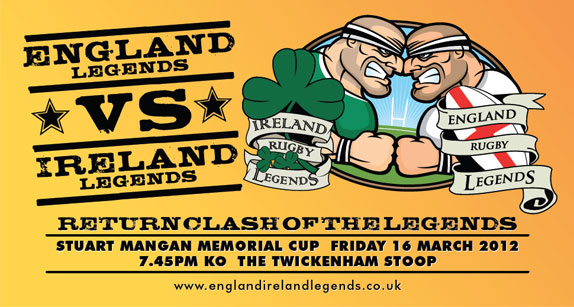 This year the England vs Ireland Legends game, now in its third year, takes place at the Twickenham Stoop on Friday 16 March. It’s in support of the Stuart Mangan Memorial Cup, and all proceeds from the game will be donated to charity.

Some of the players on show include the likes of Jason Robinson, Shane Byrne, Richard Cockerill, Mick Galway, Austin Healey, Anthony Foley, and Martin Corry.

To enter, simply do the following:

1. Login/Register on here*
2. Leave a comment below telling us about your favourite memory of one of the legends

This competition is now closed. Thanks to those who entered.

Still want to win? We have more tickets, and the chance to meet the two captains or the player of your choice, so simply post a comment on the Facebook page here to enter.